EUGENE, Ore. – When wildfires tore through the lush and wooded McKenzie Highway Corridor on the evening of Labor Day 2020, residents were displaced, property was destroyed and lives were upended. In addition, 30 miles of broadband network infrastructure that Spectrum had recently expanded into the area was destroyed. A disastrous combination of dry conditions and intense winds resulted in a nearly seven week 173,000-acre blaze, locally referred to as the Holiday Farm Fire.

“It was clear after assessing the fire damage that a substantial investment of labor and financial resources would be required to restore the network and return broadband access to customers,” said Danielle Wade, Area Vice President, Northwest Region Field Operations. “And it would need to happen expeditiously.”

Many of the Spectrum crew members lived in the area and were under evacuation orders with their own families. But after the fire was extinguished and authorities deemed the area safe for entry, Spectrum crews were deployed to initiate 24/7 rebuild activity. Though formidable challenges were ahead, crewmembers were unwavering in their commitment to successfully restore the fire-ravaged McKenzie River Corridor.

“The wildfire was extremely devastating to this area,” said Alyssa Brownlee, Owner and Operator of Horse Creek Lodge & Outfitters in McKenzie Bridge. “When we saw the Spectrum bucket trucks start rolling in, the community was excited and also relieved. Having fast and reliable internet connection is critical to my business and to my community, especially during COVID when connectivity is more important than ever.”

What followed in the next five months was a major project to restore broadband service for families and businesses reliant on a Spectrum Internet connection. Punctuating the urgency of the restoration was that Spectrum had just completed a six-year build out to this very area, deploying much needed high-speed broadband to rural Lane County for the first time. 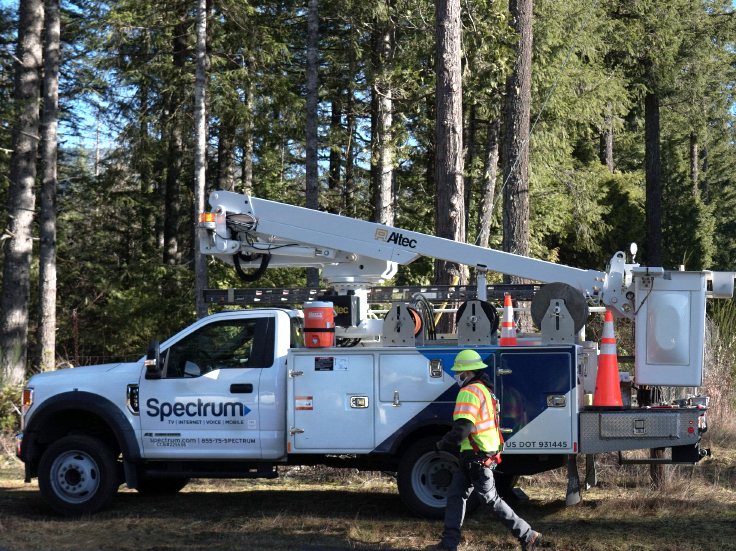 The McKenzie River Valley didn’t always have reliable broadband access. Home to towering evergreens and endless outdoor recreation, a significant drawback to the scenic rural area was the limited options for high-speed broadband.

In 2013, Spectrum rolled out a plan to change that, with construction commencing in 2015. As part of Spectrum’s commitment to upgrade all markets to digital, crews began a three-phased buildout and over the next six years worked to provide access to gig-speed service to more than 22,000 homes and 2,400 businesses across 29 rural Oregon communities. By November of 2019, some 650 miles of fiber were installed through the forested landscape.

In less than a year a substantial 30-mile stretch was destroyed by the Holiday Farm Fire.

“Residents in this area were in need of high-speed broadband for a long time. When the wildfires took that access away, we were dedicated to restoring Spectrum broadband access as soon as possible,” said Wade.

Spectrum’s leadership was engaged in internal emergency response meetings, three times a day, in addition to daily emergency briefings in conjunction with local and national agencies, including FEMA. The scope of the restoration was massive, and included replacing more than 400 severely damaged pole lines.

Today, though the scarred land still shows clear evidence of the wildfires, Spectrum’s infrastructure is fully restored and families and businesses now have access to a reliable broadband connection once again.

“Spectrum’s commitment to expand access to gig-speed service for rural areas such as the McKenzie River Valley is more than just an investment in broadband technology,” said Wade. “It is an investment in our communities and the expansion of possibilities that access to broadband provides.”