August 17, 2016 – Hornets Sports & Entertainment and Charter Communications today announced that “Spectrum Center” will be replacing Time Warner Cable Arena as the name of the Hornets’ home arena with Charter’s merger with Time Warner Cable having taken effect earlier this year. Spectrum is the brand name of Charter’s all-digital TV, internet and voice offerings.

“We are pleased to have Charter’s Spectrum brand become a part of our arena as Charter prepares to make its entrance into the Charlotte area,” said Hornets Sports & Entertainment President & COO Fred Whitfield. “We look forward to partnering with Charter for many years to come as we continue to provide the best in sports and entertainment for Charlotte and the Carolinas at Spectrum Center.” 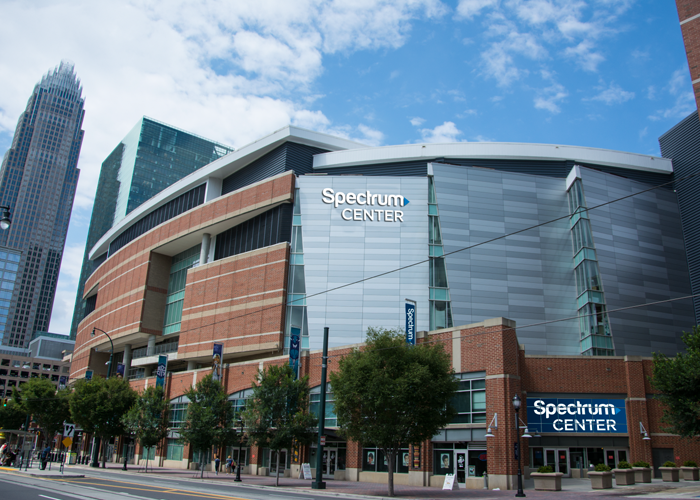 Take a sneak peak at the artist's rendering of the outside of the stadium with the new "Spectrum Center" logo.

Time Warner Cable entered into an agreement in 2008 for naming rights of the uptown Charlotte arena, which is operated by Hornets Sports & Entertainment. Over the coming months leading up to the 2016-17 NBA season, Spectrum branding will replace that of Time Warner Cable throughout the building, including exterior and interior signage, the playing court and the new state-of-the-art scoreboard that is currently being installed. Additional information, including the venue’s new website and social media handles, will be announced at a later date.

Take a look at the artist's rendering of the inside of the "Spectrum Center."

“We are excited to continue this partnership with Hornets Sports & Entertainment and to have the Spectrum Center name introduced prior to the start of the season,” said Charter Chief Marketing Officer Jon Hargis. “Our integration with Time Warner Cable continues and we look forward to further introducing Spectrum to customers in the coming months.”

Since opening on Oct. 21, 2005, Time Warner Cable Arena has hosted more than 14.5 million visitors at nearly 1,700 events. Along with being the home of the Charlotte Hornets, the venue hosts numerous collegiate basketball events, major concerts, family shows and conventions, including being the site of the Democratic National Convention in September 2012. Time Warner Cable Arena has been the home of the CIAA Men’s and Women’s Basketball Tournaments for each of the last 10 years, and has also hosted NCAA Men’s Basketball Tournament action in 2008, 2011 and 2015 and the ACC Men’s Basketball Tournament in 2008. Top performers who have visited the arena include the Rolling Stones, Bon Jovi, Paul McCartney, Jay Z, Aerosmith and Beyoncé. 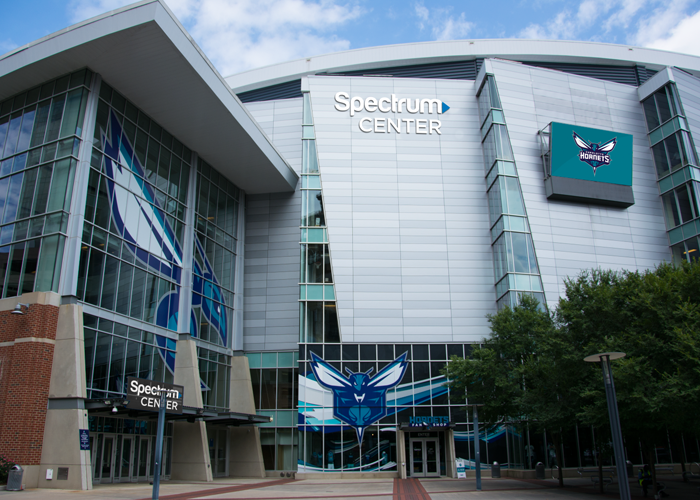 Check out this close-up of the artist's rendering of the new logo on the outside of the "Spectrum Center."

High resolution renderings of the Spectrum Center logo and Spectrum Center branding on exterior signage, the scoreboard and the playing court can be accessed by clicking this link.

Hornets Sports & Entertainment owns the Charlotte Hornets and Greensboro Swarm and operates Charlotte’s Time Warner Cable Arena.  The Charlotte Hornets are a member of the NBA’s Southeast Division.  Owned by NBA Legend Michael Jordan, the Hornets organization strives to deliver a relentless attack on the court, an unmatched experience in the stands and a positive impact throughout the community.  The name of the city’s original NBA team from 1988-2002, the Hornets moniker returned to Charlotte in May 2014, uniting the rich history of NBA basketball in the Carolinas.  The Greensboro Swarm are the new NBA Development League affiliate of the Charlotte Hornets and will begin play in 2016-17 at the renovated fieldhouse at the Greensboro Coliseum Complex.  Time Warner Cable Arena is the premier destination for sports and entertainment in the Carolinas, hosting over 150 sporting events, concerts and family shows annually.  For more information, please visit hornets.com, gsoswarm.com or timewarnercablearena.com.